It’s only a few days left until the girl has her Harry Potter themed party and the preparations are running high. And what HP fan doesn’t appreciate the thought of those famed Chocolate Frogs, which include collectible cards of famous witches and wizards alongside the chocolate frog?

My thinking was that the magical world, by now, will have moved with the times and the design of the boxes, together with its cards, will have changed significantly in the last 20 years (since the HP series finished in 1997, ‘real-time’) .

The much simplified version didn’t need much in terms of materials:

First I made the Chocolate Frog cards, as their size would determine the overall size of the boxes. Given that Freddo frogs have their own size, my cards ended up being about 6x9cm. I kept them purple, in line with the HP theme, and added writing about each character made up from information gained from each of the books in the series. Once printed onto plain white card, I then drew the images by hand and stuck closely to the descriptions given in the books, rather than the characters in the films. The images were drawn onto separate card squares, cut out and stuck onto the printed cards. Each card was then laminated. 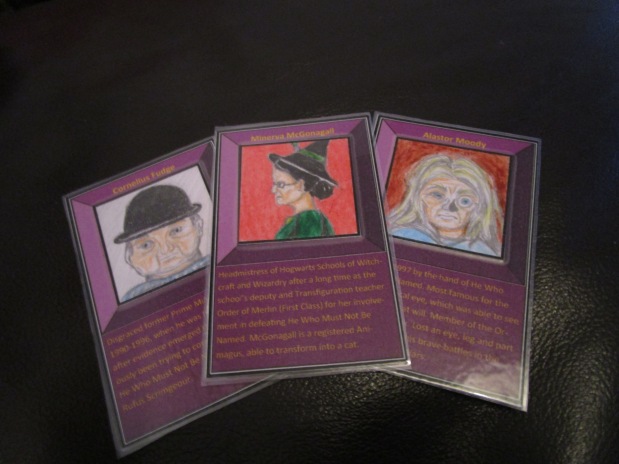 I measured the outside of the laminated cards again and rounded up to the nearest 0.5cm.

Using those measurements, I then constructed a cuboid net on squared paper. If you have any available, I highly recommend using squared or even graph paper. I makes measuring lengths and angles so much easier than trying to get everything 100% straight on plain paper, and I still have some left over from my school days well over a decade and a half ago. Anyway, apart from the basic net you also need to think about fitting your box together, so add overlap flaps. This is what my net looked like: 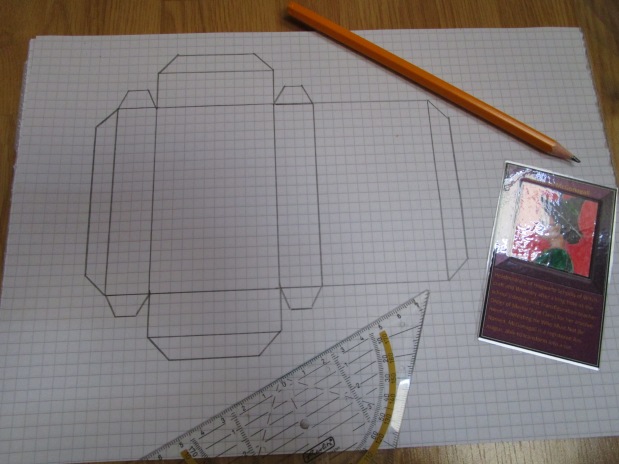 I then transferred the outline of the net onto card. The nature of the net shape and flaps made it easy to see where the folding edges would be and I traced those with the help of a ruler and scissors to get a neat, straight fold for each edge. In order to close my box. I also cut along the inside of the flap on the left-hand edge on my box (which would later become the front) using a sharp knife.

Each flap was then glued onto its neighbouring side using PVA glue and held in place for about 20min using the pegs. At the same time, I cut out 2.5x6cm lengths of the decorated paper and stuck them to each edge onto the top of the box. A frog sticker was added in the centre, saving me the work of having to write anything else about what was included in the box. 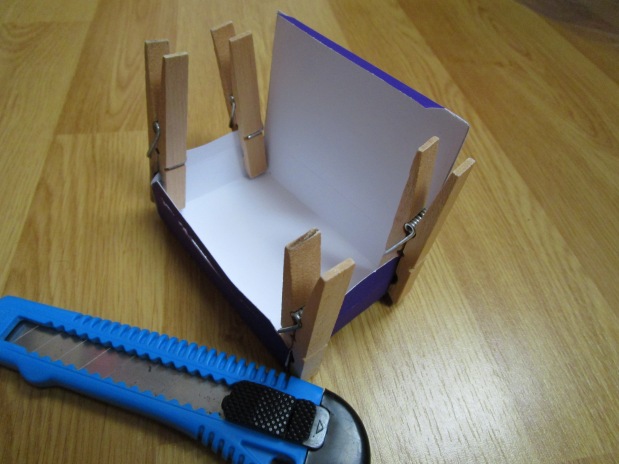 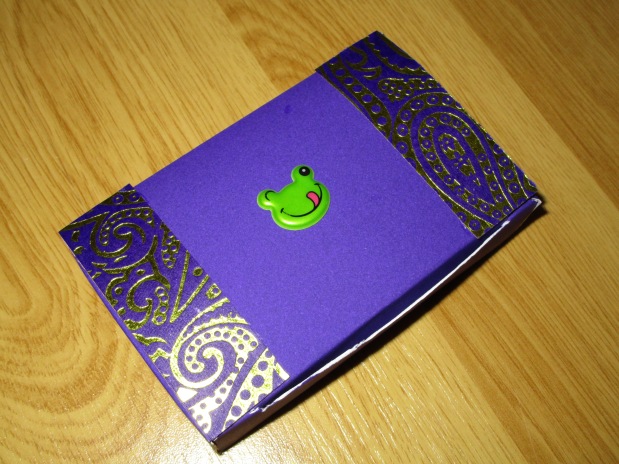 Just add a card and a Freddo frog to each box. Mission completed.